Naushad is a Muslim name for boys meaning Happy. Read below for Naushad's celebrity and ruler associations, and numerological meanings. If Naushad is the one, congratulations!

Each letter meanings in Naushad Name. 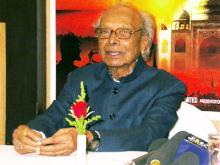 Naushad Alam was a hindustani classical music and filmi musician. He plays Harmonium, sitaar, piano, tabla, and Pump organ. His most notable accomplishments were from 1998 to 1998. Naushad was given the name Naushad Ali Wahid Ali on December 26th, 1919. He breathed his last breath on May 5th, 2006.

Naushad N. Merali is a businessman, industrialist, and business magnate. Naushad was born on February 1st, 1951 in Nairobi, Kenya.

Naushad Ali is a cricketer.

Naushad was born on December 15th, 1993 in Turbat, Pakistan.

A. was born in Sammanthurai.