Jatin is a Hindu name of Indian origin. It means the one who has matted hair (Hindi: Jatadhari), i.e. Lord? Shiva. Sanskrit: ?iva, meaning "The Auspicious One", also known as Mahadev, (English: Lord of the Lords), well known for "The Destroyer & Benefactor".The dangerous person with big heart.

Jatin is baby boy name mainly popular in Hindu religion and its main origin is Hindi. Jatin name meanings is One who has matted hair, Lord Shiva.
People search this name as Jatin, Jatinder, Jatinder kour, Hindi in jatin, Meaning of jatin name.
Jatin is written in Hindi as जतिन. Other similar sounding names can be Jiten, Jitin, Jitan, Jatan. 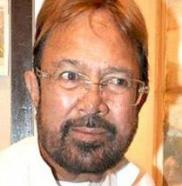 Rajesh Khanna was a film actor, producer, and politician. His career lasted from 1966 to 1966. Rajesh was given the name Jatin Khanna on December 29th, 1942 in Amritsar. Rajesh is also known as Kaka, RK, The Original King of Romance, and The First Superstar of Hindi Cinema. He left this life on July 18th, 2012.

Jatin was born in 1941 in Baripada, Mayurbhanj, Orissa, India.

Jatin Bora is a public figure and politician. Jatin was born on April 25th, 1970 in Kacholukhowa village, Nagaon, Assam, India.

Jatin Paranjpe is a cricketer.

Other Personalities with Jatin Name.